Understanding How An Houston AC Works

The basics of how the air conditioner (AC) works is by collecting hot air from the surrounding and then cooling it down before realizing it back into the same space. The AC does this using five installed components, which are: 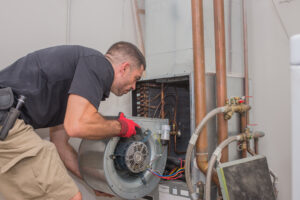 How The AC Works

Picture yourself standing outside on a hot summer day, or you are out and about running an errand. The sun feels like it has dropped closer to the earth, and the heat is unbearable. However, you still manage to find some reason to bear it all since you know you will find some reprieve when you get inside your air-conditioned office or home.

You get to the doors and you are hit by a gust of chilled air when you step inside the office or home. It sends every cell in your body in jubilation, making you feel at ease and better than when you wear baking outside under the sun.

The AC brought out the “cooling revolution” that people can never discount. The journey to what we have today may have seemed to have been a long one. But we are thankful for the generations that used fans and other creative methods of cooling their houses on hot days. The current technology does borrow from the old, but it is significantly more effective when it comes to sheer cooling capacity.

But how do the air conditioners function? We shall be looking into this and see how they do it and why they have become a must-have for many urban regions.

Parts Of An Air Conditioner

When it comes to deciding which AC system to install, you will have to pick between two choices; the split systems ACs, and the Window systems ACs. The two options are then subdivided into either the central systems or the mini-split systems.

Irrespective of the installation type you pick, the AC will have four principal components:

This is a heat exchanger coil tasked with collecting heat from the surroundings in a room for it to be directed to a liquid refrigerant. The name comes from the fact that it is where the refrigerant absorbs the heat and then released back into the room as a cooled gas.

As the name suggests, it is where the gaseous refrigerant gets compressed. The compressor is mostly located in an outside unit which is installed on the exteriors of the building.

The compressed vaporized refrigerant then proceeds to the condenser where it is converted back into liquid state as the compressor expels the heat. The condenser is also located in a unit installed in the exterior of the building. It is a common feature with the split ACs.

For the Window ACs, the components mentioned above are fitted in a small metal unit that is fixed in a window opening. The four form the primary features of the air conditioner.

How Do They Work Together?

The AC will draw in hot air from a given area and then processes it to cool it down before releasing it back into the room. It relies on freon (liquid refrigerant) and several coils to generate the chilled air that it pumps into a given space where is it installed.

The average person thinks that the ACs depend on machines installed inside the unit that produces the cold air needed for cooling a room. They believe this is so because of the electricity the air conditioners consume. All that is a misconception; there is no magic to how the air conditioner works. It only relies on a chemical and a few other physical features to do what it does in your home or office.

To enjoy the benefits of having an AC fitted in your office or house, you need to turn it on, set the desired temperature, and then the thermostat in it will read this and help to manage the functions of the AC to achieve the desired room temperature by cooling the room’s air.

By design, the air conditioning system will draw in hot air through a grille installed at the base of the indoor unit. The air is then directed to the coolant liquid via pipes in which the fluid circulates. The refrigerant will absorb the heat and be vaporized. In the same process, the evaporator coils also absorb moisture from the incoming air, and this process dehumidifies the room.

The heated coolant gas is then pushed to the compressor that is fitted in an outside unit where it is compressed. It is a process the increases the gas’ temperature. The then heated gas, which is also highly pressurized travels to the condenser. That is where the vapor then condenses into a liquid.

When the refrigerant reaches the condenser, it is a hot gas that is rapidly cooled to become fluid as the heat is dissipated to the outside through metallic fins. The refrigerant will then proceed from the condenser when it is back in its liquid state. It then flows through the expansion valve that is designed to control the flow of the coolant into the evaporator, which is where the refrigerant started its journey.

That is the same principle in both the Window ACs and the Split ACs though the latter has separate units installed inside and outside the house, while the former is one unit with all these components installed inside.

As the air conditioning system run, it repeats this process over and over until it achieves the desired room temperature. That means that the AC will continuously draw in the warm air and expel chilled air into a given space, thereby cooling the room until the present temperature is attained.

When the ACs were initially developed, they were not intended for human comfort. We have become overly dependent on these devices, but they were originally meant for the publishing companies to help eradicate certain issues in the manufacturing processes. How these machines intended to support the large-scale publishing of papers become an integral part of the modern office and home is another story for another day.

This is one of the most frequent, and important, tasks that will fall to you to make sure your air conditioning unit is running at full capacity. Filters get dirty over time and with a lot of use, and that means not only does the air not get as cold, but the air conditioner works harder to push that air through. Add in the fact that not changing filters can eventually result in dirt, dust, and other things getting through to the coils and that can cause bigger issues with other parts of the air conditioner.

Pay attention to how often air filters need to be changed and make sure to change them out on a regular basis. They aren’t expensive and changing out a dirty filter can help increase an AC unit’s efficiency a full 15% or more in some circumstances. That’s nothing to sneeze at.

There are a couple of coils that need attention. There are the condenser coils and evaporator coils. Both can collect dirt and other airborne debris. A clean filter is a great way to prevent more dirt from gathering. At the same time, making sure to keep the coils clean is important. Reducing airflow isn’t good for the air conditioner. The good news is that these coils don’t need to be checked up as often as filters.

Generally speaking, you want to look at cleaning the coils once a year. This will normally be enough, and keeping all the coils clean is important to prevent additional heat from building up within the system. You want heat absorbed where it is supposed to be, but the other parts of the unit to cool air that is brought in without bringing in a lot of other dirt and gunk.

Generally speaking, the fins that are found on both types of coils are made with aluminum. This means that they can be fairly easily bent and when that happens airflow can be partially blocked. This is why you will want a “fin comb” which is a pretty common tool available in most handyman type stores. Using these fins will allow you to comb them back to their original pristine condition which will maximize the cool air flow.

The biggest concern with drains is if they get clogged. If this happens, then the air conditioner is going to have a tough time reducing humidity. It only takes a stiff wire to run through the drain channels to see if there are any clogs and then clear them out. Clearing these out will help the air conditioner work at full speed once again.

If you’re using a window unit as opposed to centralized air then you will want to check the seal around the unit before each summer to make sure that it is solid and will keep hot air out so the air conditioner’s cold air can be more effectively contained inside.

Talking To A Professional

Sometimes you will need a professional technician to check on things. The technician will have the skill and tools to check on refrigerant levels, see if there are any leaks, take care of any necessary repairs, measure air flow, and make sure your unit is fully back up to snuff and working at full capacity. There are many small issues that can affect the overall effectiveness of the air conditioner that only a fully trained and certified technician can figure out so if you’ve gone through all the basic maintenance steps and still can’t figure out what’s wrong then it’s time to call a professional.

Check and clean the evaporator coils as needed. Monthly cleaning might be required if the coils tend to easily collect debris and dirt. Otherwise, you might need to clean them out every three months or so during the cooling season or yearly as part of your regular preventative maintenance. AC Man of Houston offers maintenance services for commercial properties.

There should be an access to the indoor air handling unit that you can remove in order to get to the evaporator coil. Check your owner’s manual if necessary to find the evaporator coil and access panel. On the thermostat, turn your air conditioner off. To get the access loose, remove the screws or another type of fasteners. Set the screws and panel aside where you won’t separate or lose them. Check out our residential services by clicking here.

Using A Brush To Clean The A/C Evaporator Coils

Brush cleaning is a very effective way to remove minor dirt accumulations from the evaporator coils. It enables you to avoid having to use chemicals or liquid and provides you with greater control in terms of the amount of pressure applied to the fins and coils.

There are several commercial cleaning brands that you can use to clean evaporator coils. A majority of them are foaming kinds that break down and then drain into the drainage system of the unit. Consult with a reputable local HVAC contractor for recommendations on the best clean to use for your specific situation.

Instead of using a commercial cleaner, warm water and a mild detergent can be used for cleaning the coils.

Learn more about AC Man of Houston and our air conditioning repair Katy tx services by checking out our blog, contacting us for questions or concerns or calling us for immediate assistance.